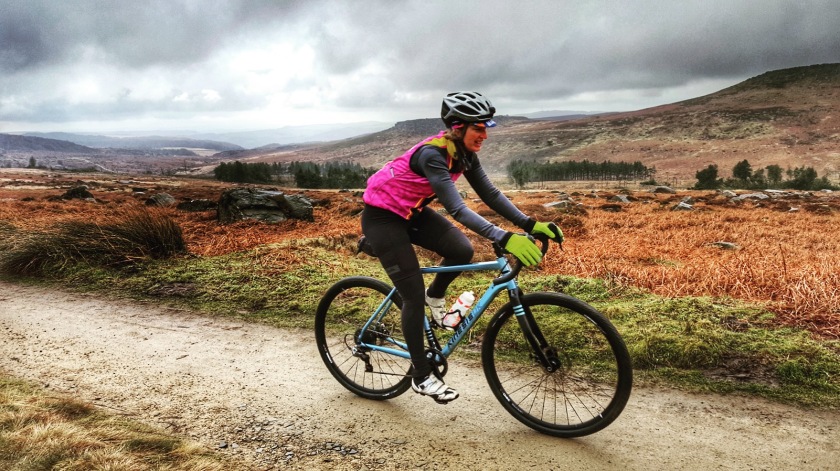 On a whim, on a cold January evening, I decided to enter the Dirty Reiver – a 200km ‘gravel’ ride through Kielder Forest that takes place in April – just to have a go at riding something different this year. Then I figured that I probably didn’t have a suitable bike to ride it on. So, in my quest to find said bike I managed to get the opportunity to borrow a Kinesis Tripster AT for a few days last week. The Tripster AT is marketed as an adventure bike, ‘a bike capable of almost all terrains and adventures’. It’s a more affordable, alloy-framed stablemate to Kinesis’ highly successful Titanium-framed Tripster ATR. 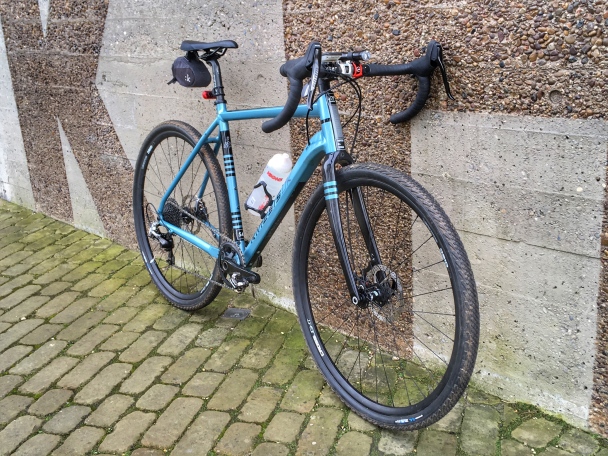 The main reason for wanting to try out the Tripster AT was to see how it felt off-road on loose surfaces and how well I, personally, could handle the bike in those conditions. Anyone who’s been on a mountain bike ride with me will tell you that I am a proper wuss off-road. I think too much like a roadie who rides everywhere on 23c tyres (Yes! Really! I’m still riding on 23s) and struggle to relax enough to enjoy the experience.

I’m up for a bit of mild off-road now and again though and have ‘accidentally’ done quite a lot of gravel riding over the past couple of years; during a tour of South East Sweden, which is full of great gravel roads, and also while riding the TCR last year (ok, I put 25s on for that). We spent a lot of time on rough roads and gravel but felt quite limited on a road bike with skinny tyres and I wished then that I’d ditched my mudguards and gone for a wider tyre.

The ‘AT’ in Tripster AT stands for All Terrain so, although my main aim was to test the off-road, I wanted to try this bike out on as many different road surfaces as possible to see if it stood up to the claim. After all, we know there’s really no such thing as the one bike that does everything, right?

I liked the way the Tripster AT felt from the very first ride, which was nothing special, just my ride home from work. Although most of Sheffield’s roads have been resurfaced there are still a few notable exceptions that haven’t, including Brown Street through the city centre, which I have to endure twice daily on my commute. Much to the relief of my forearms, the Tripster’s 40c tyres soaked up the lumps and bumps and smoothed out my ride no end.

My Brown Street experience inspired me to take a minor detour on the way home. If the Tripster felt good over Sheffield’s potholes how good would it feel on the cobbles? Outside Park Hill flats there are a couple of short cobbled climbs so I put in a couple of circuits and it didn’t disappoint. Both up and downhill I felt in control and comfortable as the bike rolled over the cobbles with relative ease.

Over the weekend I led a ride for the Sheffield CTC group and took the Tripster along to see how it would feel on a longer road ride compared to my usual winter ride, a Kinesis Racelight TK3. The stack height of the Tripster is higher than my Racelight so I was a little more upright than my usual road riding position but it’s slacker angles make for a comfortable, relaxed position which is great for long days in the saddle. With a full water bottle and my saddle pack fitted it weighed in at just under 11kg, so about a kilo heavier than my usual set-up. I felt some drag when climbing up a couple of the steeper hills and I did get overtaken by a couple of riders who wouldn’t usually take me on a climb but I wasn’t sure whether that was the bike or just me being tired from a fast 60 miler I’d ridden the day before. With a skinnier, slicker tyre fitted I have no doubt that I would’ve climbed as efficiently as I usually do on my Racelight.

I finally got my opportunity to try out the Tripster away from the tarmac on a midweek ride with a couple of friends from work who ride off-road much more often than me. They had a 40-mile circuit figured out around the Peak District with a variety of surfaces taking in Houndkirk Road and the bridleway across Burbage plus some gravel roads and a few farm tracks.

As we rode on to Houndkirk I was pretty nervous and therefore tense, which is not a good state to ride a bike. If you’re not familiar with Houndkirk Road, it’s a rough, wide, byway around three miles long with a few rocky sections. It’s very tame by MTB standards but enough of a challenge for me, especially on a bike with drop bars that felt like a road bike. It took me a while to relax but I soon discovered that this bike, with those lovely, wide 40c tyres, easily rolled over all of the rocks, big and small, and kept me upright. The more the bike rolled, the more relaxed I became. I felt very stable and by the time I’d reached the end of the road I realised that I’d not put my foot down once and I had a huge grin on my face.

The rest of the ride carried on in this fashion as the more I trusted the bike, the more I grew in confidence and I found myself staying on the bike over much tricker terrain than I’d have attempted previously on my Racelight. I have to admit that there were a few steeper off-road downhill sections where I bottled it but that had nothing to do with the bike and everything to do with my own limitations.

This Tripster came with a 1 x 11 Sram Rival drivetrain with a 40 tooth chainring and an 11-36 cassette. I have to say I was a little bit skeptical on how I’d fair with this set-up but the ‘double-tap’ shifting was really easy to get to grips with and on-road the 40 x 36 coped admirably with Sheffield’s hills. Off-road was harder work and I felt like I could’ve done with an extra couple of teeth on the back over anything with a loose surface on gradients over 10% – I did have to get off and push uphill just the once. However, with a long-cage rear mech fitted you’d have the option to fit a 10-42 cassette to get over this problem.

The Tripster’s Crosslight wheelset has 12mm thru-axle hubs and is tubeless-ready but I rode it tubed so I was a little nervous about running low pressures off-road. Unfortunately I suffered two rear-wheel punctures on my two long rides (I was just unlucky – one on-road from a metal shard and one off-road from a thorn) but thanks to the awesome ‘cage lock’ feature on the SRAM rear mech – a magic little button which holds the mech cage in position and creates loads of slack in the chain – getting the rear wheel in and out was super-easy. 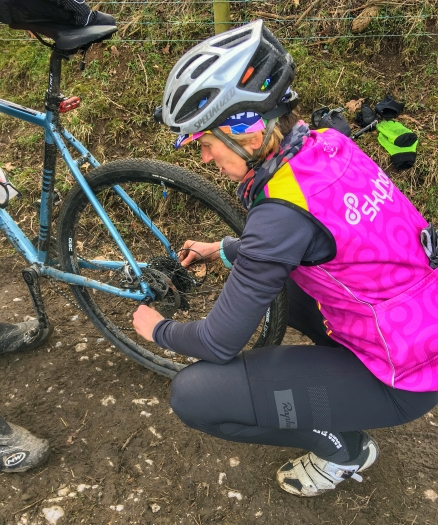 Rear wheel was easy to remove and replace. 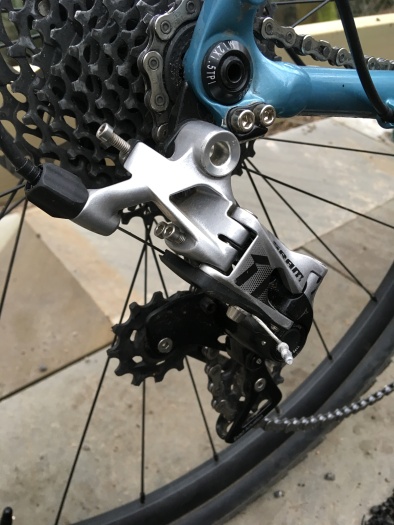 The rear mech’s Cage Lock is a great feature.

One of the real joys of that 1 x 11 set-up revealed itself once I got home from our off-road ride and started cleaning the bike. No front mech to worry about and just a single chainring to get the mud off made the job a whole lot easier and quicker.

If you’re you’re still reading this far, by now you’ll be getting the impression that I have nothing negative to say about the Tripster AT, and I really don’t. Yes, I would’ve like the opportunity to run it tubeless just to see how it felt at lower pressures (and maybe I wouldn’t have had my two punctures) but other than that I loved riding it both on and off-road. I had so much fun that didn’t want to give it back and could easily find a place for this in the stable when finances allow.

There are some great finishing touches to the Tripster that make it stand out from other comparably priced ‘adventure’ bikes on the market. It’s drilled to take full mudguards and rack and there’s an extra set of mounts on the underside of the downtube to fit a third bottle cage. The stylish frame detailing is thanks to the late Mike Hall who worked with Kinesis’ designer to produce bike that looks great either with or without bikepacking bags. You can find out more about Mike’s contribution on the ‘additional info’ tag on the Kinesis’  Tripster AT webpage.

The Tripster AT is a ‘ride everywhere’ bike. If you can only afford to buy one good bike and want to have a go at doing it all then this is the bike for you. It really is a true all-rounder and could finally end the search for that elusive ‘one bike that does everything’. To maximise it’s versatility you could run this bike with two wheelsets in order to cover the majority of your riding from fast commuter or winter road biking to full-on, wide-tyred bikepacking adventures off the beaten track. And it would definitely be my bike of choice if I race the TCR again.

You don’t have to take my word for it – Kinesis have a full range of demo bikes for you to try out through your local dealer. If you’re Sheffield-based, local Kinesis Dealer Tony Butterworth Cycles can arrange for you to have your very own Tripster test ride. Give them a ring on 0114 234 3218 or visit their Facebook page for more information. 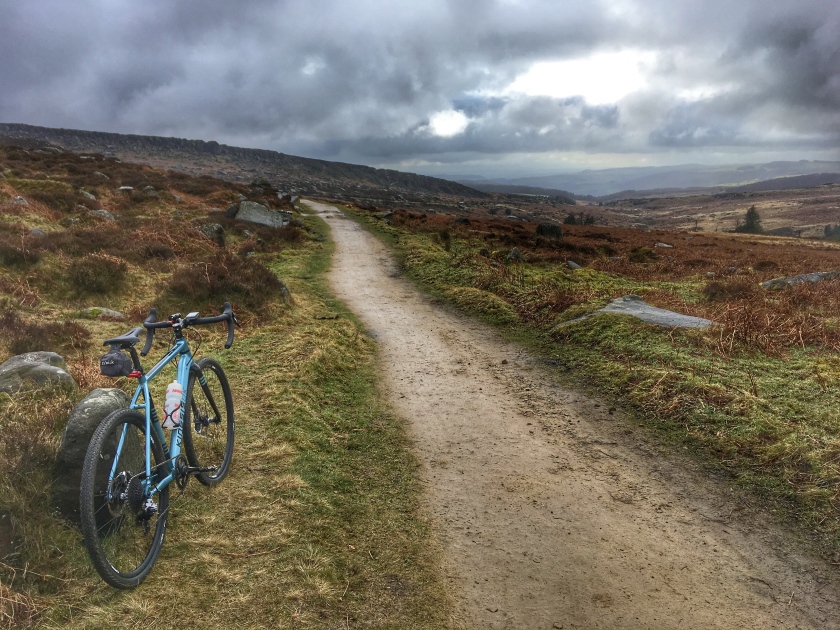